My Abortion Stories: 16-year-old Me & The Reasons For My Abortion 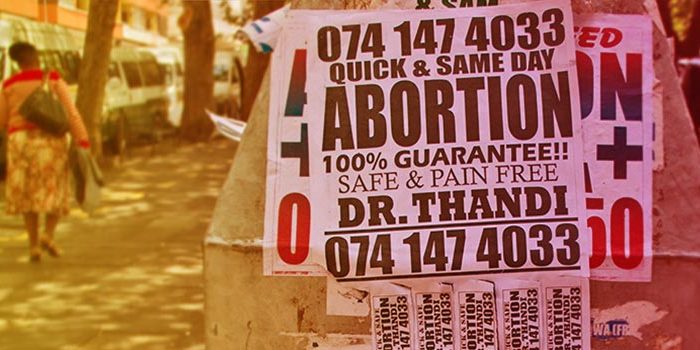 “I was a scared 16-year-old girl in a relationship with 21-year-old Thulani* when I discovered I was pregnant,” says Lebo*. “Sometimes we used condoms but most of the time we didn’t because Thulani said it didn’t feel as good for him when we used a condom.

“At first, I thought about going on the pill but I wasn’t sure where to get it. After a while, when I didn’t fall pregnant, I worried less.”

But then, Lebo didn’t get her period. “It was always like clockwork, every 24 days, so when I realised I was three days late, I knew there was a good chance I was pregnant. I was right.”

My own abortion story coming to life

“When I told Thulani about the pregnancy, I immediately knew I had to terminate unless I wanted to raise the baby alone. I thought about what it would be like to tell my single, hardworking mother about my pregnancy, and the idea terrified me. So when I told Thulani I would have an abortion, he said he’d find a doctor to help me.”

We had to save up for nearly a month to have enough money to pay the man. I lied to my mom and said I needed money for a school trip, and Thulani managed to get hold of the rest. Then, one Wednesday, I bunked school and the “doctor” came to meet us at my house in the morning. He gave me two pills to take right away and another two to ‘clean out’ my uterus, which I had to take that night.”

A shock in store after I took the abortion pills

Several hours after starting the abortion procedure, Lebo began to suspect that all was not right. She’d started experiencing cramps and bleeding in the hours after taking the pills – mild at first, but getting increasingly serious. She took the uterus-cleaning pills in the evening, and the bleeding became so severe, she was convinced something had gone “terribly wrong”.

“I had no choice – I had to tell my mother what had happened when she got home. I was so scared, and she had to rush me to our local hospital.”

What was really in those pills?

The “doctor”, says Lebo, hadn’t given her uterus-cleaning pills at all – they were blood thinners that caused her to bleed excessively. “The real doctor at the hospital told me I was so lucky my mom had come home when she had, as I’d been at risk of bleeding to death.

“I’m incredibly fortunate to have survived the experienced because things could’ve gone a lot worse for me,” admits Lebo, who now uses the implant contraceptive, which keeps her protected against pregnancy for up to three years at a time.

“My overall experience was a very unpleasant one, though I definitely now understand the reasons women have abortions.”

Lebo’s relationship with her boyfriend didn’t survive. “I, maybe unfairly, blamed him for finding the fake doctor who nearly killed me. But despite all that, I don’t regret my decision to terminate. I’m now in matric and looking forward to going to nursing school next year. I am determined to make something good of my life, hopefully find Mr Right, and settle down and have kids in the future – but not for a while!”

Never use an illegal abortion provider, and never take pills from anyone who isn’t a qualified health professional. If you need help with an unplanned pregnancy, turn to Marie Stopes. We offer safe, legal abortions, quality post-abortion care, and a range of short and long-term contraceptives to keep you safe.

Find out more about our abortion care or contraceptives, or make an appointment online.