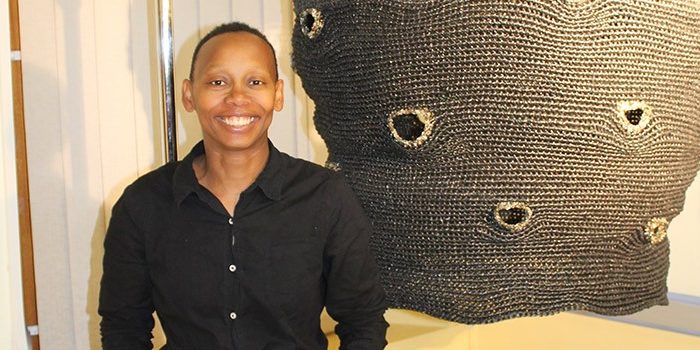 Held as part of Cape Town’s First Thursday event, the exhibit used art as a platform to encourage conversations about abortion, still one of the most stigmatised reproductive issues facing South African women.

Zola Ndimande: Creating art that represents our connection to our humanity 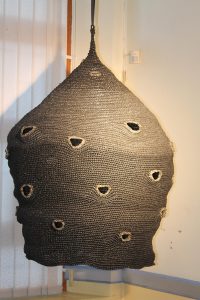 Having not only listened to other women’s abortion stories but having experienced it herself, Zola Ndimande wanted to use her life-size art to represent the confusing, conflicting emotions and messages around abortion.

“After listening to people’s real stories, I wanted to represent what it’s like for people struggling to make a decision. What is the reality of abortion? Women are expected to make the right decision, and I wanted to create a picture of that world. For me, [in creating this piece], I was trying to find the real voice behind abortion, without getting caught up in the legalities and the nitty-gritty of it. We don’t have to choose which camp we want to be in; we can actually exist in a space in between, and that’s where I created my art from.”

Abortion: not a black and white issue

“A lot of my work tries to find the human element in things, finding our connection with our humanness and what that is,” explains Zola.

This piece, like all of her artworks, is large enough for a human being to fit into. “I think access to abortion is so wrapped up in shame, and I don’t think there’s enough support for women wanting to make this choice. I believe there needs to be more space for us to discuss abortion because it’s not clear-cut; it’s not black and white. You can’t just pick a point and relate from that point. You really need to view the bigger picture with compassion.

“My aim with this piece is to create a conversation and a pathway to an emotional landscape that exists, but which we don’t talk about. [With abortion], we just talk about the legalities and whether it’s right or wrong. But my piece shines a light on the emotional side, and the fact that this is where decisions come from.

“Our communities and the people around us need to become more aware of how to support women, so that we’re not saying it’s wrong to have an abortion, but rather, we’re creating a village or community in order to support women, and to actually increase our consciousness. When it comes to abortion, we need to make decisions from a fuller perspective, considering all viewpoints.”

Compassionate abortion support and services are available at Marie Stopes

Learn more about the abortion services we offer, or find your nearest Marie Stopes centre and book an appointment online.