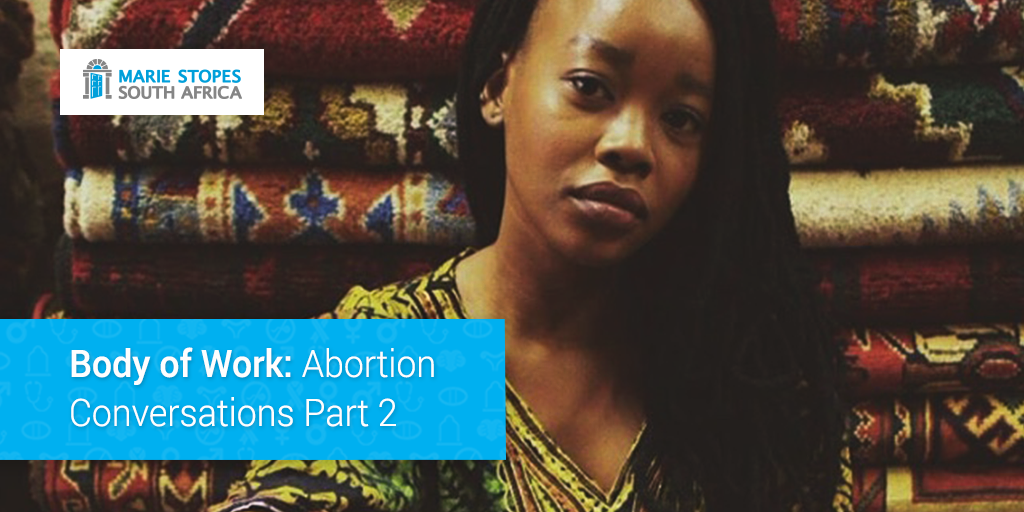 Marie Stopes and EASI co-hosted a workshop on abortion stigma for artists earlier this year. At the workshop, artists were given the opportunity to discuss abortion with experts in the field and to have time to develop the concepts for their artworks with other artists.

The exhibition used art as a platform to spark conversations about abortion – a topic still widely considered taboo in many South African communities. 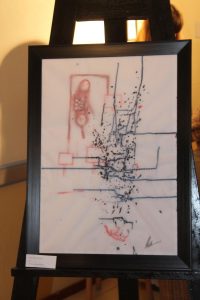 As an artist, Kea has traditionally focused on portrait work. However, when she delved into her thoughts around abortion, the piece that emerged was a thought-provoking abstract work that intrigued exhibition-goers.

“This is the first time I painted my feelings and the result was an abstract piece, which was actually a surprise,” says Kea, who chatted to onlookers without letting them know she was the artist. “I wanted people’s raw opinions so I didn’t let them know that I was the artist.”

Attendees were fascinated by the piece, says Kea. “They were wowed by it; really blown away. There’s a nothingness to it, but there’s also substance. It’s really about how a person interprets it. I want people to think whatever they want to think about it.”

The painting, with its use of transparency, empty spaces and spurts of colour, represents a multitude of feelings and thoughts around abortion – like the lack of transparency in talking about abortion, and the confusion and angst following the procedure when a lot of women feel they can’t talk about it to anyone.

“I liked the fact that there were some people who really enjoyed my art, and also those who were confused by it so that I had the opportunity to explain it.”

South Africans still conservative when it comes to abortion

Kea says the exhibition and related workshop taught her a lot about abortion and South Africans’ attitude to the procedure.

“Firstly, I didn’t know that you didn’t need your parents’ consent, even if you’re under 18, and I learnt that abortion is a real thing in terms of how many people are actually doing it. Why aren’t we having these conversations if it’s happening so much?

“Another thing I learnt is that South Africans are actually low-key conservative. We can talk about men’s issues but we can’t talk about women’s issues. I think the fact that it’s so taboo to have an abortion or even speak about it makes it difficult for women to go through with it, even though in their hearts they know they don’t want a baby.”

Kea believes a lot of women feel pressure from society to either keep their unwanted pregnancies or hide the fact that they want an abortion – even though the procedure is legal.

“I think women choose illegal abortion providers because they’re afraid of bumping into someone they know at a clinic or hospital. So I think they go the illegal route because they believe it’s cheaper or more discreet, but it’s actually just unsafe.”

Read more: Illegal abortions: Facts that will shock South Africans and Legal abortion: Know your rights to a safe termination

“Lastly, what I liked about the workshop was hearing people’s experiences and opinions, and talking to like-minded people who are open to [abortion]. Because there are lots of people who think just because you’re poor you should have an abortion. The people at the workshop were pro-choice, and I liked the fact that they weren’t just pro-abortion, but pro making a choice: open to the idea of either having an abortion or not having one.”

Learn more about the abortion services we offer, or find your nearest Marie Stopes centre and book an appointment online.